Eyes peer at me, then quickly look away.
Because they are afraid.
Because they sense the humiliation.
Because they know not what else to do.
Stretchers in front of me. Stretchers behind me.
Some poor soul being dragged where none of us want to go.

Who would have thought that a single shriek could fill the universe?

In the midst of flagrant professional misrepresentation of ECT, this article will provide hard-hitting and accurate information about the “psychiatric treatment” known as electroshock (ECT). This is a call to arms. Quite simply, the time has come for a frontal assault on the ECT industry and on the professionals associated with it. The time has come to rid society of this barbaric “treatment” altogether.

Naturally, it would make no sense to call for the end to a “treatment” unless it was, first and foremost, clearly profoundly injurious. So…

What are the Salient Facts about Electroshock?

There are so many horrific facts about ECT that it would take several articles to list them all. In a nutshell, however, some of the most pressing of these are:

On September 11, 2017, DK Law Group LLP filed a class action in federal court against the manufacturers of Electroconvulsive Therapy devices (ECT) on behalf of every person who has been injured by electroconvulsive therapy in California since May of 1982. The lawsuit is based on traditional state-law negligence principles, and the manufacturers’ failure to comply with their obligations to the FDA.

ECT has been around for nearly eighty years, since about 1938. Since then, the practice has become widespread, even though the psychiatric community has never conclusively established any particular mechanism of action through which ECT treats any type of mental illness.

The Medical Device Amendments determined that medical devices would be classified into three categories based on their safety and effectiveness.

Devices that present significant risks are classified into Class III, and these devices typically must satisfy a strict “premarket approval” process, which requires that manufacturers provide a strong showing of safety and effectiveness before such devices can be placed on the market.  ECT Devices are classified as Class III.

When the Medical Device Amendments were passed in 1976, there were many existing devices, including ECT, which were allowed on the market without satisfying the premarket approval standard. Instead, they were “grandfathered in” as devices marketed before the MDA, or devices substantially similar to such pre-amendment devices.

The DK Law Group’s lawsuit alleges that the manufacturers of ECT devices failed to meet these requirements, and as a result, placed a dangerous product on the market without an adequate warning.

If you or someone you know has been been injured by electroconvulsive therapy in California, contact DK Law at (805) 498-1212 or by email at ECT@dk4law.com.

In addition, all ECT survivors (whether injured in California or not) are encouraged to fill out the ECT Justice questionnaire.  ECT Justice will attempt to notify you as we learn of opportunities to participate in legal actions in other states and countries.

James Moore interviews Professor John Read in this Mad in America podcast.  Professor Read talks about his research into the safety and efficacy of Electroconvulsive Therapy (ECT).

Professor Read worked for nearly 20 years as a Clinical Psychologist and manager of mental health services in the UK and the USA, before joining the University of Auckland, New Zealand, where he worked until 2013.

Click here for a detailed summary of this podcast, and to join the discussion on this topic.

WASHINGTON, Aug. 24, 2017 /PRNewswire/ — Attorney Jonathan Emord and his co-counsel Kendrick Moxon have filed a Supplement to their Citizen Petition of August 2016, protesting the FDA’s Proposed Order to reclassify and make more readily available the Electroconvulsive Therapy (ECT) Device used to give “shock-treatment.”  The reclassification would make it easier for doctors to give the treatment.

Shock treatment is well-known as the punishment given actor Jack Nicholson in the movie One Flew Over the Cuckoo’s Nest.  More recently it was portrayed in the TV series Homeland when given to the star, destroying her memory and intelligence. Memory loss and brain damage are the central issue in the attorneys’ filing.

This is shaping up to be a David and Goliath scenario with individuals damaged by ECT on one side and the FDA, under pressure from the industry that profits from ECT, on the other.

WASHINGTON, Aug. 25, 2016 /PRNewswire/ — In December 2015, the FDA issued a proposed order to down-classify the device used to deliver electroshock therapy. Today, Attorney Jonathan Emord filed a Citizens Petition with the FDA on behalf of 5 individuals who were damaged by electroshock.

I hope this is the beginning of the path to do away with shock [ECT]. Hopefully it’ll go the way of lobotomies, another ‘miracle treatment’.
ECT survivor, shocked as a teenager.

Most people surveyed thought electroshock therapy, also called electroconvulsive therapy or ECT, did go the way of lobotomies. In fact, a conservative estimate is that over 100,000 individuals receive electroshock therapy each year in the U.S. Actual numbers are not available because there is no tracking of this. 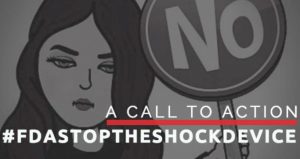 There is a long history of the FDA attempting to remove the experimental status of the shock device. There is an even longer history of those who have been subjected to shock treatment and their allies working to expose the damage shock treatment causes. Shock treatment has robbed people of the memories of their lives, their education, skills, passions, relationships, children, significant others, and total sense of oneself.  For decades, when proper rule-making processes were upheld, the voices of those whose lives were destroyed by shock treatment reached those in power and prevented the down-classification of the shock device from happening.

The #FDAStopTheShockDevice petition has received over 2,200 signatures and 800+ comments. A more thorough analysis of those comments is forthcoming, however, we wanted to offer a glimpse of what people shared. The sixth, seventh, and eighth most common words used in the comments submitted through the petition were “damage,” “barbaric” and “torture.” We must continue the fight to make sure that the FDA hears the people who will be adversely affected by the proposed rule if it becomes an order. There is still a small window of time for you to sign the petition and leave a comment to the FDA.